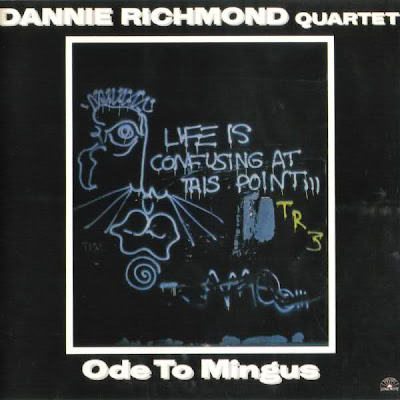 AMG:
"Recorded 11 months after Charles Mingus' death, this set from the bassist's longtime drummer Dannie Richmond is his first of two tributes to Mingus; it would be followed by a Timeless set nine months later. Richmond teams up with three members of Mingus Dynasty (with whom he was touring Europe): tenor saxophonist Bill Saxton, pianist Danny Mixon and bassist Mike Richmond. Despite their fine playing on the record, Saxton and Mixon have both remained fairly obscure. Surprisingly, the quartet does not actually play any Mingus tunes, instead performing 'If You Could See Me Now' (which Richmond sings) and four of the drummer's originals, including 'Love Bird' and the 18-minute 'Ode to Mingus.' Throughout the date, Richmond's drumming (which is showcased on the brief solo piece 'Olduval Gorge') is heard in prime form."
Thanks to barin99
Publicada por ::-7oregons2tomates-:: à(s) 23:31