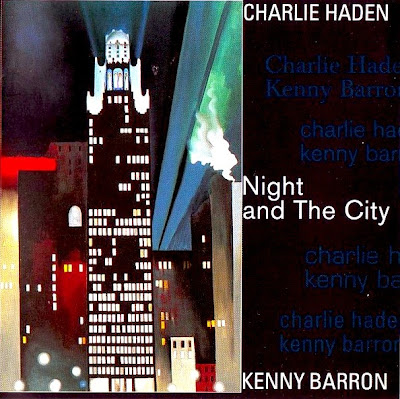 The third in a series of Charlie Haden duet projects for Verve in the 1990s finds the increasingly nostalgia-minded bass player working New York City’s Iridium jazz club with pianist Kenny Barron. Moreover, it is entirely possible that we are getting a skewed view of the gig; according to Haden, he and his co-producer wife Ruth tilted this album heavily in the direction of romantic ballads, eliminating the bebop and avant-garde numbers that the two may have also played at the club. Be that as it may, this is still a thoughtful, intensely musical, sometimes haunting set of performances, with Barron displaying a high level of lyrical sensitivity and Haden applying his massive tone sparingly. Most of the seven tracks are fantasias on well-known standards, although one of the most eloquent performances on the disc is Barron’s playing on his own “Twilight Song.” If Haden deliberately set out to create a single reflective mood, he certainly succeeded, although those coming to Haden for the first time through this and most of his other ‘90s CDs would never suspect that this man once played such a fire-breathing role in the jazz avant-garde. ~ Richard S. Ginell
Publicada por ::-7oregons2tomates-:: à(s) 16:19