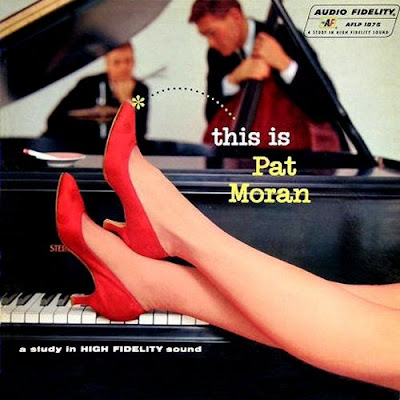 Label: Audio Fidelity AFLP 5875
:: This Is Pat Moran ::
If you are familiar with the name Pat Moran, you know your Chicago mainstream jazz from the late '50s. A wonderful stylist molded in the musical post-bop-to-cool visage of a Red Garland, Wynton Kelly, or Bill Evans, Ms. Moran played spirited standard fare, and on this CD interpretations of Dave Brubeck's "In Your Own Sweet Way," Oscar Pettiford's "Collard Greens and Black-Eyed Peas," and the simple "Blues," all of which advance well beyond mere cocktail lounge background music. This reissue, originally from the Audio Fidelity label releases This Is Pat Moran and Beverly Kelly Sings, features Moran's bright piano on American popular songs for four of the eight tracks with her trio, including the vaunted bassist Scott LaFaro. Two years after these sessions, LaFaro would join the trio of Bill Evans, and was killed in a car accident two years after that in the summer of 1961. Also included in the instrumental fare is an obscure Frank Rosolino composition, "Onilosor," which perfectly showcases LaFaro's tight, innovative bass wizardry. Bev Kelly, a skilled singer in the Anita O'Day tradition, has at it for another ten songs and sounds great, and Moran ends the affair with two solo piano performances. A precious bit of history from that great and enduring year in jazz, 1957, this extra-special document should make all listeners wish they had heard more of Moran and Kelly, not to mention the immortal Scott LaFaro, who reflected on this date as one of his most memorable and enjoyable.
~ Michael G. Nastos, AMG
Publicada por ::-7oregons2tomates-:: à(s) 23:19