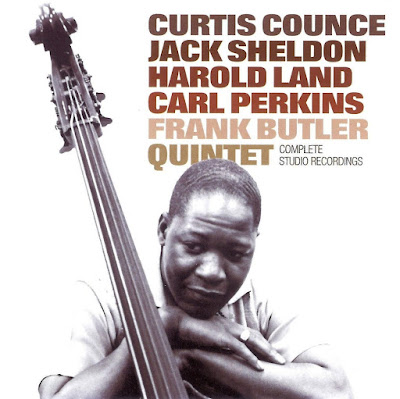 PW: melanchthon
Bassist Curtis Counce led one of the top hard bop groups to be based on the West Coast during the mid-'50s, a quintet with trumpeter Jack Sheldon, tenor saxophonist Harold Land (shortly after he left the Clifford Brown/Max Roach Quintet), pianist Carl Perkins and drummer Frank Butler. Nearly all of that group's recordings are on this two-CD set. Reissued are the contents of the Contemporary LPs Landslide, You Get More Bounce with Curtis Counce and Carl's Blues except for three alternate takes and three selections with pianist Elmo Hope that were issued years after the original LPs. Gerald Wilson takes Sheldon's place on three selections from the band's final date. Also not here is the group's obscure Dooto LP from 1958 which has Elmo Hope and trumpeter Rolf Ericson joining Land, Butler and Counce. In its place are three numbers from the band's appearance on the Stars of Jazz television series. On these 26 selections, the Curtis Counce Quintet features an attractive mixture of jazz standards and group originals with plenty of passionate and colorful solos from Sheldon, Land and Perkins. This was an excellent band, so collectors who do not have their Contemporary sets will certainly want to pick up this attractive two-fer.
Scott Yanow
Source : allmusic.com