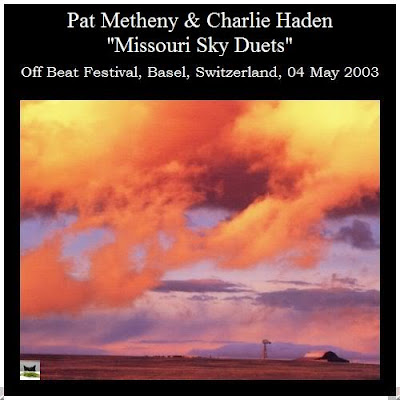 In February 1997 Charlie Haden and Pat Metheny, both Missouri natives and best friends, joined forces for Beyond the Missouri Sky, a mostly acoustic duet album. All of the tunes were recorded as duets for acoustic bass and guitar, and on roughly half of the tunes, Metheny overdubbed some "orchestral" backgrounds on synclavier or an additional acoustic guitar part. But these additions simply add texture and shading, and do not overplay the primary voices of the bass and guitar.

In 2005 the two musicians embarked on a "Missouri Sky Duets" tour of Europe and beyond where they performed songs from their album at a number of festivals and other concert venues. This FM recording is from the performance at the Off Beat Festival in Basel, Switzerland.
1. The Moon is a harsh Mistress
2. Message to a Friend
3. The precious Jewel
4. The Calling
5. Two for the Road
6. Farmer's Trust
7. Blues for Pat